Fred Urbina is a Pascua Yaqui tribal member who currently serves as the Chief Prosecutor of the Tribe. Fred is a veteran of the United States Army, where he served his Country as an Infantryman and a Behavioral Science Technician. Fred also served his community as a former Arizona State police officer, has worked as a deputy prosecutor for the Pascua Yaqui Tribe, and worked as a law clerk for the Pima County Attorney’s Office.

Fred is a graduate of the 2009 – 2010 State Bar of Arizona's Leadership Institute. He is a member of the American Bar Association, the Indian Law Section of the AZ Bar, and a member of the Pima County Bar Association. Fred is also a Fellow of the Flinn-Brown Civic Leadership Academy and he is also serves on the National Inter-Tribal Working Group (ITWG) to implement the Violence Against Women Act (VAWA).

He is admitted to practice law in the State of Arizona, the United States District Court of Arizona, and the Pascua Yaqui Tribal Courts.

Fred's current civic interests lie in the areas of criminal justice policy and volunteer service. He serves on the Board of Directors for Dancing in the Streets Arizona and the Amity Foundation. He is also an associate member of the Southern Arizona Leadership Council (SALC).

Fred has been happily married to Shannon Urbina for 24 years, raised four daughters, (Jessica, Amanda, Erica, and Samantha), and has three granddaughters.

1. Are you a native Arizonan? If not, where are you from? If so, have you spent a significant amount of time living somewhere else different from this state?
I am a Native Arizonan! Born and raised in Tucson, Arizona. I spent 5 years in the Army and lived in the beautiful State of Hawaii, learned to two-step in San Antonio Texas, and got to appreciate great coffee and Grunge music in Tacoma, Washington.

2. How did you decide to become a lawyer? Did you always want to practice Indian law and/or work for a tribe? Why or why not?
A college professor, Ruth Davey, a local Tucson lawyer, encouraged me. Actually gave me the final push. I had law school as a goal since 1995, when I first started taking college classes at Pima Community College after I got out of the military. In order to obtain a Tribal scholarship, an applicant had to write a short essay about why you wanted to pursue higher education. I wrote that one of my long term goals was to work for the Tribe as a lawyer. I never expected it to happen at the time. In law school I knew I wanted to pursue Indian Law. I attended the University of Arizona School of Law specifically to have the opportunity to study under Vine Deloria, Robert Williams, James Anaya, and Robert Hershey.
I wanted to work for my Tribe because I felt it was where I should be. I felt a sense of gratitude for my tribal scholarship and I felt I had a duty to serve our people. I made a personal commitment to serve in whatever capacity my Tribe needed me. It has been over five years now and I have been humbled by the fact that I have learned more, grown more, and appreciated more, the people who have come before me. I have been blessed with opportunity and I am going to continue to give it my all.

2. To date, what do you think is your most notable accomplishment - either legal or personal?
My most notable accomplishment is probably being able to raise a family, while working full time, and going to school full time. One of my many jobs was working midnights as a custodian. I remember scrubbing toilets at night, getting off work, and attending classes in the morning! I come from a proud working class family and being an attorney is my first “sit-down” job where I actually have an office.

3. Is there anything in your career that you have not yet accomplished that you have set as a goal for yourself? If so, what is that? If not, do you plan to retire at some point or try another career?
I don’t really set hard career goals. I look at any current job as something I want to excel at or improve. I don’t like to leave things unfinished. There is plenty of work in the area of criminal justice and how it dovetails with other social issues of a tribal community. Everything is connected, education, economics, crime, and health issues. On a Reservation, prosecutors are not divorced enough to ignore other social problems in the community. I would like to help the Tribe address all of our issues comprehensively.
Is retirement an option? I think they will have to haul me out and bury me before I retire. There is just so much work and development to do.

4. Why did you join NABA-AZ? What would you like to see the organization do or accomplish in the near and/or distant future?
I like the idea of a state organization. The issues are fresh and of State-wide and National importance. Indian Law is complex and something our counterparts at the State Bar should have more information about. I think this organization should continue its mission of attracting young Native American scholars to law school. I feel that the “pipeline” should be well developed and a more formal program should be a goal. Scholarships for Native law students are great, but we can move into the middle schools, drive out to the Reservations, and tell our stories. This should be our first priority. We can teach, support, and encourage.
6. Do you have any advice for new lawyers? If so, what is it?
Fight the good fight. Be true to yourself and believe in yourself, seek justice and serve the poor. Always give thanks to those who have helped you along the way and pay it forward. Everything else will come in due time.

Jonathon Sanchez, a recent law school graduate, is a past recipient of a NABA-AZ scholarship and an active volunteer for the association. Jonathon was born in Salt Lake City, Utah. He moved to Alaska when he was ten and lived there until he moved to Arizona for law school in the Fall of 2011. Jonathon studied at the University of Alaska Anchorage where he would earn a Bachelor's degree in Justice, cum laude, and a minor in psychology. While studying at the University of Alaska Anchorage, Jonathon competed as a member of the internationally ranked UAA Seawolf debate team that allowed him to travel the world and win a few awards here and there. Subsequently, Jonathon graduated from ASU Law School, recently, in May of 2014.

In his spare time, Jonathon enjoys both watching and playing sports, reading, and playing video games. This past spring, Jonathon was selected to be one of eight players to represent the Playstation 3 in the first ever Madden Ultimate Team Invitational tournament. Additionally, he enjoys hiking and being in the outdoors. Jonathon looks forward to exploring the vast hiking trails of the Arizona landscape - after he takes (and hopefully passes) the upcoming July 2014 bar exam.

1. Are you originally from Arizona? If not, where are you from? Tell us about your family and tribal affiliation.

I went to law school to advocate for Native American tribes. I was very pleased to attend Arizona State University because of its Indian Legal Program. My training through the ILP has equipped me with the tools in order to do so.

3. What do you hope to have accomplished in your career five years from now?

In five years, I hope to be a successful attorney with a reputation as a zealous tribal advocate as well as a reputation as an honest attorney. One can never anticipate the legal challenges a future client might have, but I hope to bring that client the best representation I possibly can when that scenario arises.

4. Any specific plans for work after you pass the July Bar exam?

I plan to stay with Rosette, LLP. I clerked for them during the summer of my second year and throughout the school year, on a part time basis, during my third year. It is a vibrant firm that is on the cutting edge of legal issues and is truly trail blazing. I am fortunate to be part of such a high caliber legal team.

5. Why are you a member of NABA-AZ and what has been your involvement with NABA-AZ and activities?
I am a member of NABA-AZ because it is important to stay connected with others in order to stay informed of the wide array of legal issues facing Indian Nations. Not only can I stay up-to-date for my clients on the pressing issues, I can also network with and rely on the Indian legal community for guidance, if needed. It's important to stay in the loop. 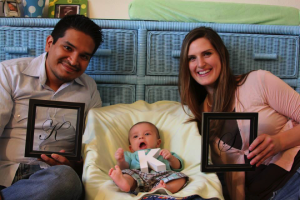 My family is the most important thing to me and I wanted to be in a line of work where I could support them in a respectable field. I also went to law school because I wanted to help Indian Country. When I was growing up, I was always told that my great-grandfather said that "the days of fighting with bows and arrows it over... the time has come for Indians to fight their fights with books and words." That story inspired me to go into law.

Right now I am taking things one step at a time so my first goal is to graduate and pass the bar! After that I hope to get a job and then gain as much experience as I can.

I am a member a NABA-AZ because I feel they really care about what Native American lawyers are doing in the legal field and their communities. I am so impressed with how much they reach out to the law school to make us students feel welcome and excited for the future. They have provided many opportunities to network and get involved. They also have also provided many mentoring opportunities for students. Seeing the members' hard work and dedication has been an inspiration to me.

Our Mission:
Promoting the development of Indian attorneys while advancing and improving the practice of Indian law in Arizona.